Really, if we’re being honest, I’ll take any excuse I can to talk about star wars. I’ve kind of talked about it a lot.

I’ve already made it clear to anyone who has talked to me or read my content regarding Star Wars I think Last Jedi is a masterpiece. What’s interesting to me is that it’s not just me that can’t shut up. Any inoccuous tweet, youtube video etc. about this movie pretty much immediately ignites passionate non-stop opinions. I’m not the only person who has spent 2018 constantly arguing about this movie. See: the amount of replies on a normal tweet vs any tweet about The Last Jedi.

In fact, there’s only one other topic that constantly drives as many arguments, but I don’t want to reveal it just yet, or it’ll spoil my hypothesis.

Last Jedi is an interesting outlier as far as controversial movies are concerned. Usually, when a movie’s audience is really split about a movie, it’s one that is critically somewhere between mediocre and panned. For example, Man of Steel, another controversial nerdy property, had a metacritic score of 55 for professional critics  (average) and 7.4 for user score (slightly above average). Ditto for other split decisino movies like The Dark Knight Rises , Mother! etc. Basically, critics might love a movie audiences hate or vice versa, but when a movie is Love it/Hate it right down the middle, critical and audience opinion tends to align pretty closely.

Not so with Last Jedi, which got a metacritic score of 85 (universal acclaim) and a user score of 4.2 (below average). Metacritic also organizes scores into “positive” “mixed” or “negative.” 53/56 reviews listed were categorized as positive for professionals (with the other 3 being mixed and none being negative) while for audience, there’s  a near 50/50 split between positive and negative reviews with a miniscule amount of “mixed reviews.”

You know what else has such an absurd love it or hate it split? Trump’s presidency. Only 8% or so of the country has a semi-neutral opinion on him. I don’t think it’s hard to see what I’m getting at here.

This is admittedly, largely anecdotal. It is the sort of thing that isn’t provable one way or the other because of a lack of movie opinion/political orientation cross-polling, but I have noticed whether it’s talking to people in day to day life or watching youtube videos, that people on left generally love this movie, people on the right generally hate this movie, and centrists tend to be non-political (or libertarian leaning).

Here’s a really dumb, unscientific way to test my hypothesis. Go onto youtube and search “Last Jedi Bad.” The first result is a channel that features videos complaining about how white people are treated by the video, the second is a channel that features a video complaining about feminism. Two of the results are conservative pundit Ben Shapiro and conservative “youtube skeptic” Armoured Skeptic. All but one of the negative critiques (a few positive ones came up anyway) that showed up on the first 30 results is from a white male (or someone who doesn’t show their face on their reviews).

I obviously did not go through each channel and check all their videos to get an idea of their political reviews. Obviously, there are people who lean left politically that didn’t like the movie. I just think the completely unscientific youtube search and demographic trend is a good way of demontrating that there is a pretty noticable political leaning in the people who hated Last Jedi the most.

Incidentally, searching “Force Awakens Bad” on youtube gets a similar demographic – one that can be presumed to lean conservatively. Force Awakens had far less divided audience opinion – it was far less interested in taking creative risks and far less explicit about its political themes (I’ll get to that). But The Force Awakens and The Last Jedi do have one obvious thing in common that their predecessors didn’t – they had a (mostly the same) incredibly diverse cast. The three most important characters were a black man, a hispanic man, and a woman.

If we accept my premise that people who hated Force Awakens enough to make a youtube video did so in large part because of its diverse cast, than those same types of people presumably were not happy about Last Jedi introducing an asian woman into the main cast. People who hated this movie REALLY did not like Rose’s character, and the fact that many of her scenes were also critically the least liked scenes (and probably the criticall least liked character) in an otherwise critically acclaimed movie made it the perfect thing to jump on without being accused of being a racist (rightfully or not).

And then on top of that, The Last Jedi, unlike it’s predecssor, is explicitly political in a way that is more obviously applicable to the real world than any of the other star wars movies. The movie takes a pretty general but explicit stance that glorifying violence = bad, which should, in theory, be a pretty uncontroversial take. I don’t really need to go into how Trump is a violence loving facist and his supporters are supporting that by proxy. I’m over a year into this blog and almost 1000 words into this post, you’re either with me or against me on the whole Trump=violent nazi thing by now. (Yes, I’m aware all the Star Wars movies are explicitly anti-facist. I’m getting to that.)

The most specific political comment made by movie is during the casino scene, which again, is a simple and in theory agreeable statement of War Profiteering = bad. This is the scene more than any other that conservative Last Jedi haters seem to hate. Critics also noted the casino planet scene was probably the weirdest scene as far as pacing, so panning this scene is again, another great way to diss the movie whether regardless of how you feel about minorities.

The conclusions I’m drawing from this make me feel uncomfortable. I don’t like the implication of “If you hated The Last Jedi you must be a neo-facist” that I’ve more or less walked into. Art has a great degree of subjectivity. It is impossible to make a perfect movie because every decision to some degree is a tradeoff due to time constraints, story telling constraints, and budget/studio constraints. The Last Jedi is no different. It chose not to adequately explain the political situation of the sequel trilogy because it didn’t want to get bogged down by politics like the prequel trilogy before it. It chose to treat Snoke as a generic villain because it didn’t want to bog itself down with backstory and felt like Kylo Ren and Rey were more interesting characters to explore. Whether these are movie ruining flaws  or whether you feel accepting those flaws in order to allow a more personal, character focused story is worth it IS entirely subjective.

Frankly, I do feel like a large portion of the discussion surrounding this movie has become a thinly veiled disguise for the greater political discourse we have in our society regarding equal representation and income inequality. Even something seemingly apolitical, like the controversy surrounding how Luke Skywalker’s character was treated, I think comes down to the basic fundamentals of politics. You either like or embrace change (liberal) or you want things to stay the same or revert to what they used to be (conservative).

This was actually the neo-nazi forum Stormfront complaining about Star Wars: The Phantom Menace. 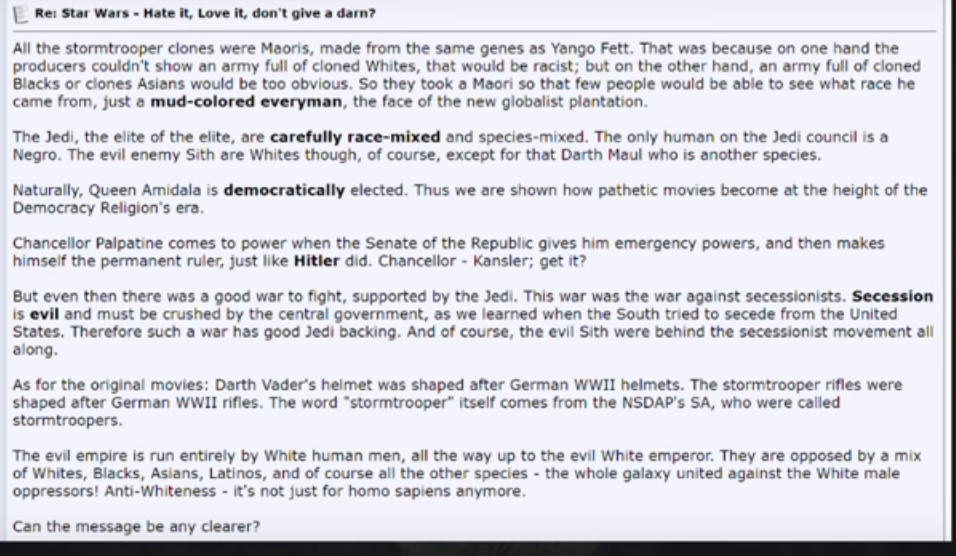 Star Wars has, as I mentioned, always been explicitly anti-facist. The Empire is thinly-coded space nazi-germany.

So why doesn’t 40% of America hate the rest of the Star Wars movies? I think it boils down to willful ignorance. Most Americans aren’t explicitly pro child seperation policy, they are simply anti-change and pro-white priveledge. The Force Awakens didn’t engender even 1/10th of the hate because no one in that movie talks about tax cuts for the rich. The Last Jedi made the “mistake” of explicitly mentioning war profiteering, something that right voting moderates can’t argue isn’t a thing but also don’t want to be comfronted with. So they blame the movie.

I’ve argued on here before that the majority of hollywood movies push a center-right agenda that stresses hyper-individualism and conservative social values (sexual double standards, blind patriotism etc.) When the average hollywood movie pushes these values, it receives proportionately almost no blow back as long as the movie making craft itself is quality. The scary thing is I don’t even know what to do.

Black Panther is another movie that fairly explicitly pushes a fairly mild left agenda (colonialism=bad. Wealth hoarding=bad.) I didn’t like this movie because I felt it failed in many areas from a story telling standpoint, but it did have a great message and did have great representative casting, and now I feel guilty for not liking the movie because if I don’t see Black Panther 2, I, in my own insignificant way, hurt the chances of more positive messaged movies getting made.

If I accept by own conclusions about Last Jedi and Black Panther as true, I must confront the core contradiction in left-leaning thought – that I believe that people and governments should be less self-centered, less selfish, and more pragmatic, and despite believing these things, I, the individual, will never live up to the expectations I have of my ideal government, whether it’s spending money on personal luxuries instead of charity of judging movies on criteria other than their social responsibility.